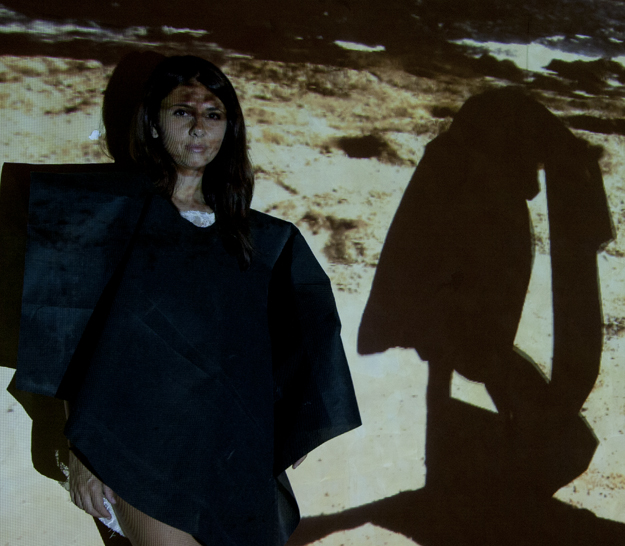 Irena Pejovic (b. 1981, Gevgelija, North Macedonia) is an interdisciplinary artist based in NJ. She received her BFA and MFA from Montclair State University. Pejovic makes events that go beyond the visual realm, choreographing movements that turn the audience into an explorer of a world that is active and becoming—as a set of unfolding relationships—in a way that they have not before. In her work, the audience is moving-sensing, using vision, sound, navigation, feeling texture, color, scale, being both mobile and immobile.

Irena Pejovic was part of SWIM, a theatre piece by Robert Whitman, presented at the Alexander Kasser Theatre in Montclair (2015) and at Fridman Gallery in New York City, in cooperation with Dia Art Foundation and Julie Martin, Director of Experiments in Art and Technology (2016). She was awarded the 2018 Individual Artist Fellowship Award by the New Jersey State Council on the Arts and has received exhibition and publishing grants by the Ministry of Culture of the Republic of North Macedonia (2018), Croatian Ministry of Culture (2014) and the City of Gevgelija, North Macedonia (2018, 2015, 2014), UMD John L. N. Bitove, C.M. Macedonian Heritage Scholarship Award (2014) and Step Beyond Travel Grant (2013) by the European Cultural Foundation. In 2012, she served as a member of the Board of Directors at the Printmaking Center of New Jersey. Her work is included in the Contemporary Print Collection of the Museum of Arts and Crafts in Zagreb, Croatia. She has taught at Montclair State University, Kean University and has appeared as a visiting artist at New Jersey City University.

Current and Upcoming Exhibitions and Events